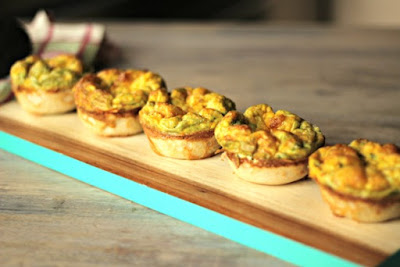 Made these perfect little gluten free, dairy free breakfast muffins on a whim.  I had some dough left over from my Naan recipe and used it for this quick and easy egg muffin and it was perfect! Perfect Mother's Day breakfast and only 4 Smart Points for one muffin so I ate two! 😋😋 Something about ham and eggs that just makes any breakfast whole, then add some avocado to that and it's like a perfect marriage! 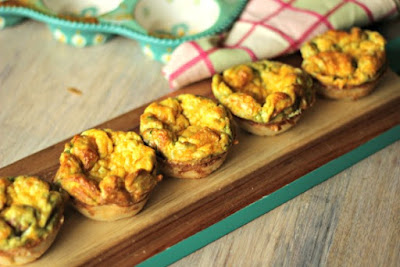 I loved these and and so did my family. I will definitely use them for food planning because they heated nicely even after two days.  I know most of us don't have the time to make breakfast in the morning and this is the perfect solution.  Best grab and go breakfast ever! 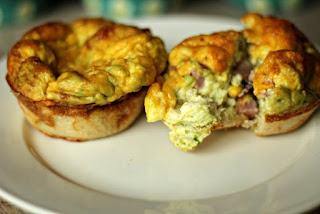 I didn't add any cheese to this muffin but you can if you wanted too.  I thought they were perfect as is and I hope you do too!  I used half the size of the dough that the Naan bread recipe required.  For the Naan, I used a 1.4oz ball of dough per Naan, for this recipe it was only .7oz for the ball of dough. 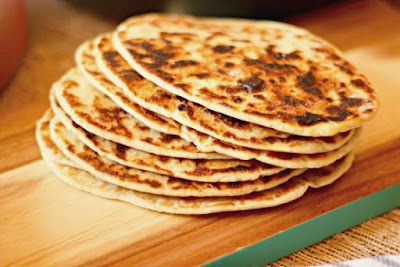 If you want to see tears of joy on your gluten free mama's face on Mother's Day, make these delicious little flat breads!! I swear if I didn't know how to cook and someone made these for me I would cry! That's how yummy they are!  Did I mention they are also dairy free! I have been trying to make these for quite some time and have tried many different flours.  These are by far the best I have made and so worthy of being posted. 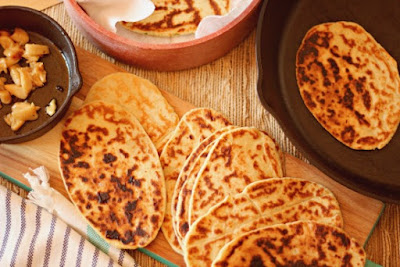 I have tried several different white rice flours. My absolute favorite white rice flour was one I found in Home Goods.  Unfortunately, I threw the empty bag away and forgot to take a picture of it. I am hoping to find it again.  In any event, the one thing I did learn from this experience is that not all white flours are created equal and each of them had different amounts of liquid to flour ratio.  So when you make this recipe use Bob's Red Mill if you want it to work.  I tried Arrowhead Mills but I found it to be too gritty. 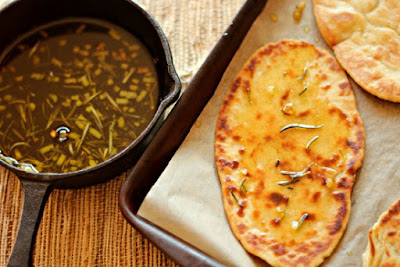 I ate these plain but I served them with a side of garlic rosemary oil for my family.  The oil definitely kicked the flavor up a few notches but if you're counting points leave it out, they are great on their own. 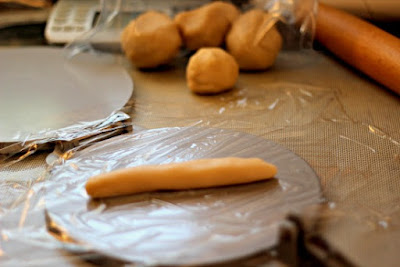 The dough is light and billowy. The best way to make them is using plastic wrap and an empanada press.  I rolled the dough into cigars, pressed them and then rolled them down a bit with the rolling pin. This recipe comes together really easy. 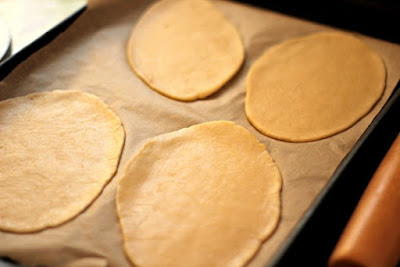 I tried baking them too.  However, they come out best on the cast iron pan, cause you get the nice charred crust. 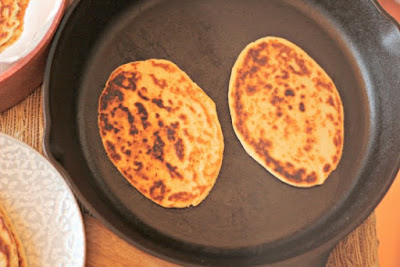 I absolutely love the texture and the bite on these Naans and they are so easy to make, you'll never want a store bought packaged one again! I also made them larger and used them like a wrap/pita bread for falafals, recipe coming! 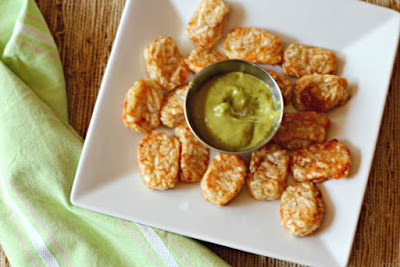 Remember when I made the Yuca Empanadas, I told you to to save some of the yuca flour you grated for future recipes? well this is one of the recipes I made with my leftover yuca flour. These were pretty easy and really good. 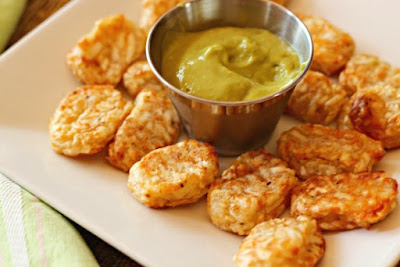 I went to a place in Florida called Funky Buddha where they had these amazing fried yuca garlic tots. I ate them and was sick for 3 days! They said they were gluten free but I'm pretty sure they shared a fryer with some breaded stuff 😖😧 the struggle is real! So this is my lightened up version. 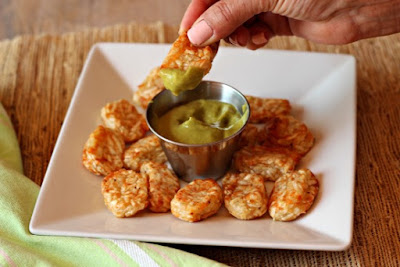 I used my avocado dressing for these but you could really use just ketchup.  This is a quick and easy side dish for any meal.  I didn't make a lot because I was just testing the recipe, they were gone before I could even serve them up! 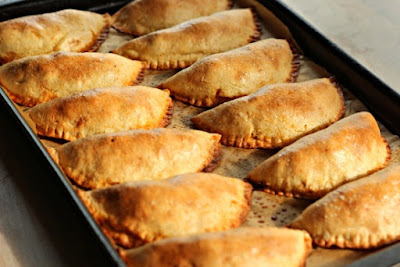 Yuca or cassava is a dense, starchy food that is rich in carbohydrates.  It is a good source of fiber, folate, vitamin C and potassium.  There are also many health benefits and can be used medicinally for arthritis relief as well as topically to treat skin conditions and wounds.  However, that's not why I eat it.  This was a traditional food for the Taino Indians in Puerto Rico and if you're Puerto Rican or Latin American this root vegetable is a staple. We eat it as a side dish with pickled red onions, alcapurrias (delicious little torpedo looking finger foods filled with meat), bread, cheese balls, empanadas, etc. 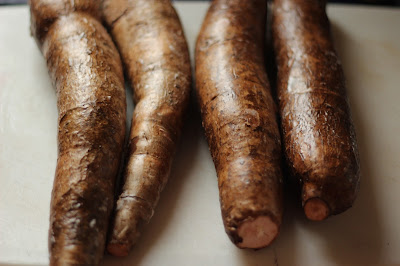 This is what the yuca root looks like. When buying the yuca make sure to hold and squeeze through the yuca and check for any soft, mushy spots.  If you find any mushy spots, pick another yuca.  Yuca should be hard and a clean white color, with no black lines running through it.  If you pick a bad yuca it could be really bitter. 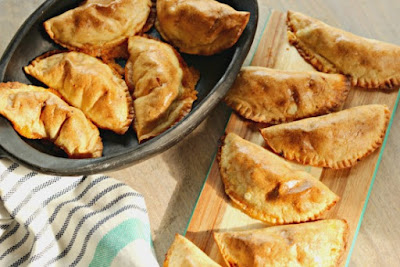 If you are doing weight watchers this root vegetable is a bit higher in calories and points but keep in mind that its not only about the points and calories.  That is a great system to keep you on track but lets not forget that ultimately it is about eating whole foods. Root vegetables have a low glycemic index. A glycemic index measures how fast and how far blood sugar rises after you eat a carbohydrate.  If a food has a low glycemic it means your food is digested slower, which will raise your sugar slowly.  What does that mean?  It means you will stay full longer! you won't feel so hungry within the hour, like you would with a food that has a high glycemic index, like white rice. 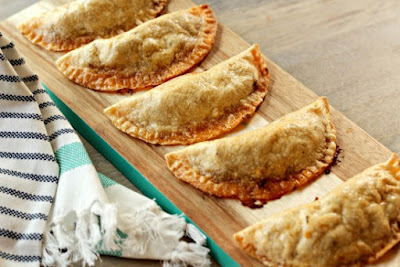 This is a traditional food for me, and I can make this with my eyes closed if I was going to fry them.  The challenge was to make the dough so that it bakes nicely.  I made this six times and each time  they were good but had issues baking.  Some opened up and the filling spilled out  in the oven, others were too soft.  These are  in between.  I plan on making them again but I thought this was delicious enough to post, although I  would've liked them a bit crispier.  So stay tuned. 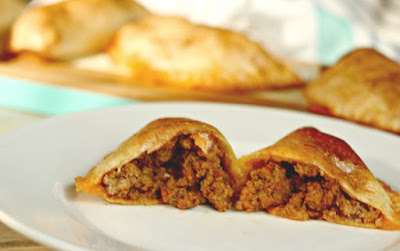 I filled them with picadillo which was delicious.  But I have made these with shrimps, pork and chicken.  These were like a lighter version of an alcapurria. 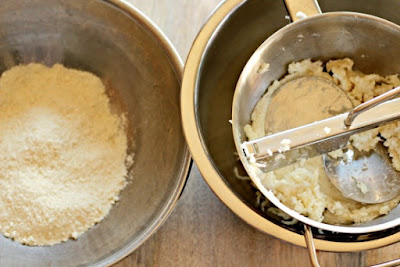 Did you know you can make your own cassava/yuca flour? This is not the same as tapioca starch, so do not use it in place of the flour.  Cassava/yuca flour is extracted from the whole root, simply peeled, ground and dried.  Tapioca is only the starch extracted from the yuca.  It's easy to make but it's a process.  I bought an additional attachment, a fine grater, that was worth every penny! I think I paid around $35.00 for it. I can't believe I never owned this before.  This attachment would have made OUR lives so much easier.  Growing up my grandma had us all at the table during the holidays, GUAYANDO! that's another way of saying grating for the pasteles (a traditional food that requires lots of grating) It wasn't always fun because we would all have bloodied fingers, but I wouldn't trade those memories for anything in the world! 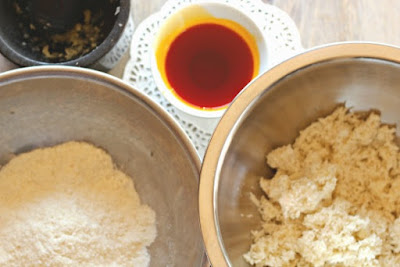 In any event, check out the yuca flour on the left.  That was grated, strained and then left to dry overnight or even 2-3 days. It comes out perfect! If you grate it on a box grater use the very fine side. You can purchase yuca in any supermarket for about $0.79/lb or buy the yuca flour in the bag for about $9.00/lb I prefer to make my own.  You have to cook half of the yuca and grate some of it.  The cooked portion has to go through a food mill, see the picture before this one.  You could probably use a potato ricer but the food mill is best.  Also, the flour has to dry overnight. I have seen people use a blender to make yuca as well, this has NEVER worked for me.  The yuca became a giant ball of glue. So after several attempts to take shortcuts, I have to say the traditional way is still the best way. 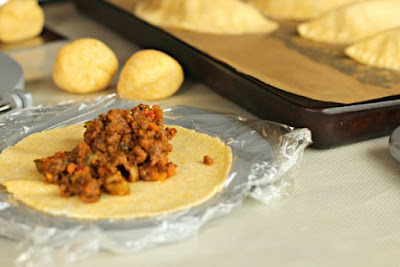 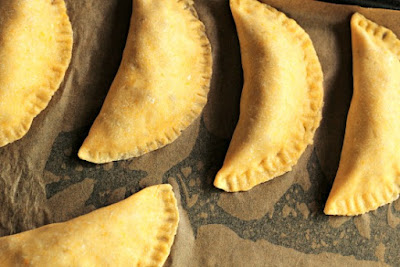 and this is what they looked like before they went into the oven.  Perfect! As I said the results are delicious but the empanada was not as crispy as I would've liked.  Hope you enjoy! 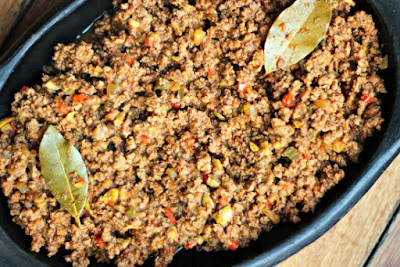 This dish is a regular in our home because it is used on so many different dishes.  This can be served on its own with a side of rice, as filling for empanadas, on a baked potato, on nachos or in stuffed peppers.  Its a great dish for meal planning because it freezes well.  Everybody has their own twist on this dish, some use raisins, some use wine but at the end of the day it is delicious no matter how you make it.  The difference between this recipe and many others is that I don't use ANY oil to saute.