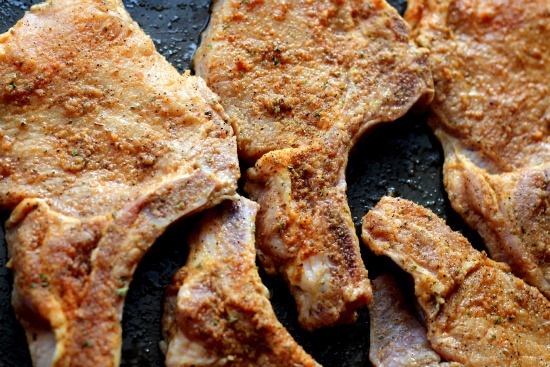 So growing up, my favorite food in the whole world was fried pork chops, a lot has changed since then except that pork chops are still my favorite. I lived in an apartment building and the aroma of my grandma's pork chops had everyone salivating....being gluten free does not mean we have to sacrifice flavor and I certainly don't.
So the first picture are the pork chops before cooking,  this is what a well seasoned pork chop looks like......and they are so simple to make!  All you need is my adobo recipe, some center cut pork chops with the bone, let's face it...why even eat a pork chop if you can't suck on the bone?, lemon or lime, and an orange. 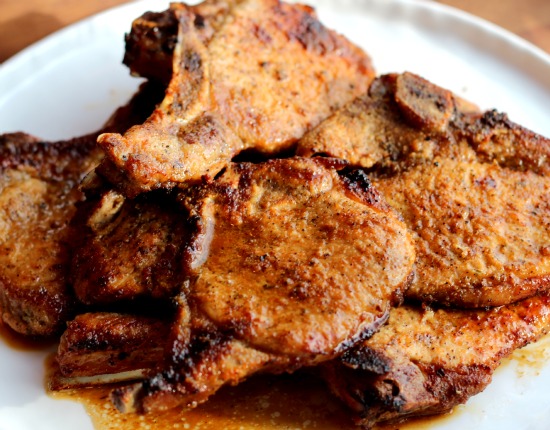 This is what they look like after they are cooked! So I told you before my grandma fries her chops.  The biggest challenge for me was making them taste the way my grandma makes them taste without frying them. So I put them to the test with the Grand Puba....that's what I affectionately call her.  She was very impressed when I told her they were not fried, they were broiled. So what to eat with this flavorful piece of meat? I have gained 13 pounds since I learned I had celiac disease! So I am with the few million people out there who have made a resolution for weight loss in 2012.  My challenge will be to make my latin recipes lighter......that's not an easy feat. Here I made stir-fry vegetables and an Organic Quinoa & Whole Grain Brown rice. Quinoa is a recently rediscovered ancient "grain" once considered the food of the Gods, it was used to increase the stamina of their warriors. Clearly they new something that we didn't; we do now!  It is very high in protein and gluten free! I bought it at Costcos, and will definitely get more.  The reviews are amazing as well and you can order it on Amazon. 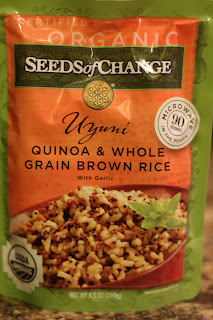 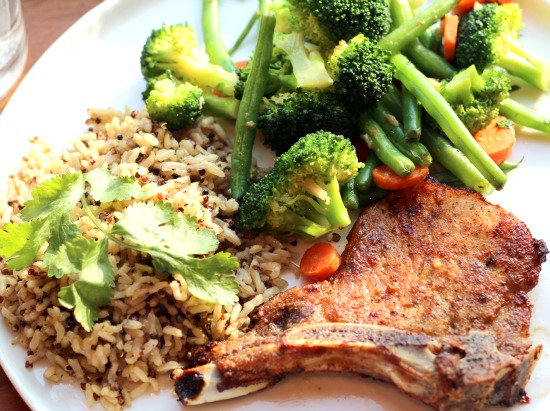 But the greatest benefit of this particular Quinoa is that it came in a bag and microwaves in 90 seconds. So here you have a 40 minute healthy meal including prep time. Since I am currently following weight watchers I calculated the total points on this meal at 10 Points. I choose to take in most of my points at night since that is where my weakness lies! Buen Provecho!

Ingredients:
Preparation:  Set your broiler on high while you prepare your chops. range onto the chops. Wash your chops in cold water first. Squeeze the lemon and the orange onto the chops.  Rub the adobo onto the pork chops I wrote 2 tbsp of adobo but I don't really measure. Just be sure that every part of the chop is covered in adobo. If you are not time constrained let them marinate for an hour or more.  Sometimes I season them the night before, but believe me they will taste amazing even if you cook them right away.

set the oven tray about 6 inches from the broiler.  Cover a flat tray with aluminum paper and spray it with Pam.  Lay your chops out and broil for about 15 minutes on each side.  The cooking time will vary depending on personal taste. I like my chops to look like they were fried so they are well cooked.  If you like them a little lighter just reduce the cooking time.

Preparation:  In pan heat olive oil and add the garlic until lightly browned.  Chop up the broccoli and dice the carrot.  Add all of the vegetables, mix well and stir fry for about 2 minutes.  add the water and cover for another 2-3 minutes....depending on how crisp you like your veggies.

Note: I calculated this meal at 10 points using 1/2 cup of the Quinoa/brown rice, since 1 cup was 6 points. Also, the vegetables can be steamed and cooked without oil and that would reduce the WW points by 2.  The chops are 5 points well worth having!